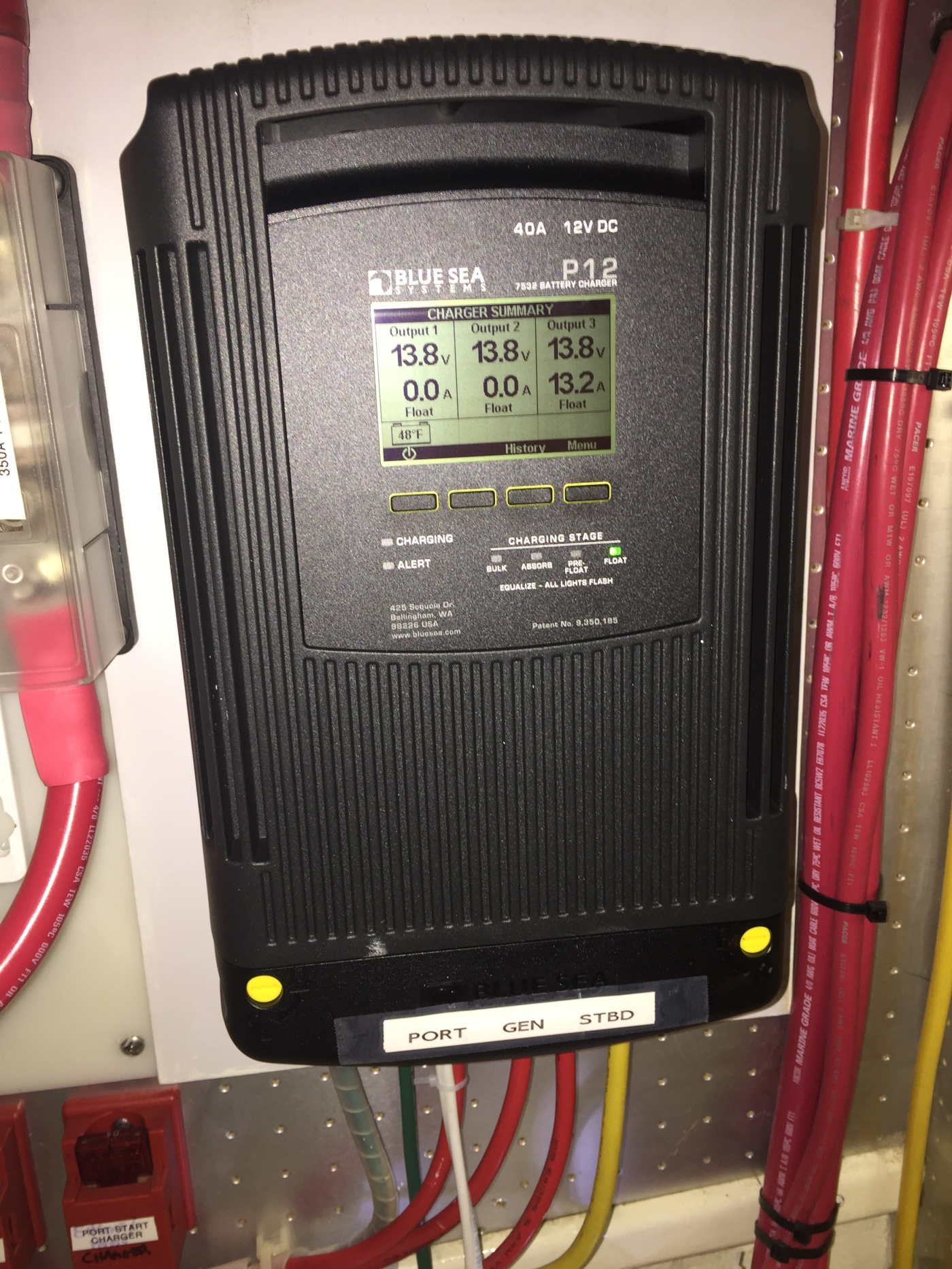 Fiddler needs a lot of batteries, especially since spending time away from marinas in beautiful anchorages without running the generator is something we like to do. Here is a list of the batteries on board and what they are used for:

Here are pictures of one of the large 8D batteries, which weighs 160 pounds. It takes two people to carry it and lower it into the engine room. 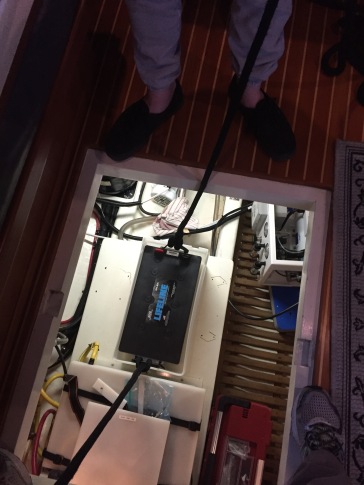 Here is a picture of 4 “golf cart’ batteries. I have two boxes of these. They are much lighter and easier to handle when they need to be replaced. The small yellow wire is a temperature sensor.

Only the generator battery is a true starting battery designed for bursts of high amps for cranking over an engine. All of the others are rated as deep cycle batteries meant to provide lower amps over a long period of time. The 8D’s are plenty powerful to double as starting batteries for the main engines, a common setup for boats. There are two primary battery types: flooded lead acid and AGM. The lead acid batteries are the type that require adding distilled water periodically while AGMs are sealed and maintenance free. I recently replaced the lead acid batteries with AGM and now all of the batteries on Fiddler are AGM made by LifeLine.

Now for the charging part of this long winded post. The “golf cart” batteries are charged by the inverter/charger since their primary purpose is powering the AC loads (TV, refrigerator, microwave, outlets) and the others are charged by a separate charger that I recently replaced. All marine chargers provide 3-stage charging that includes the bulk, absorb, and float stages. The bulk stage takes care of most of the recharge while the subsequent stages reduce the voltage input until the batteries are fully charged, then maintains the full charge. Lead acid and AGM require different charging profiles to achieve the longest life. Most chargers have settings for the battery types and default charging profiles for them. However, different battery manufacturers will suggest the specific voltages for each charging stage that will optimize the battery life. The charger’s default setting may not be exactly the same as the battery manufacturer recommendation, but it is usually close enough. One last twist is that the temperature of the battery affects how much voltage is needed to achieve a full charge and for optimal battery life. The better battery chargers will have a temperature sensor and adjust the voltage accordingly.

Here is a picture of the battery charger that I am replacing: 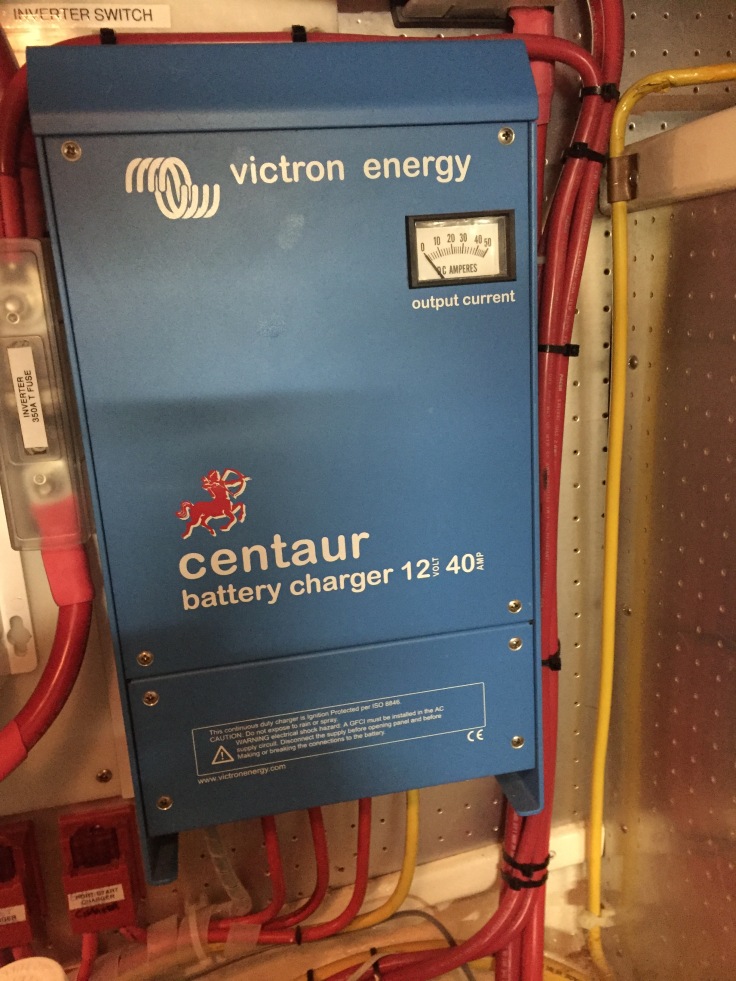 As with other items on Fiddler, the manufacturer installed basic, lower cost equipment in some cases. See my previous post on replacing the water heater for another example of this. While this charger lasted nearly 10 years, the internal cooling fans are wearing out and it doesn’t have a battery temperature sensor. The default charging profile is also suspect as the battery life is much shorter than what I expect. And new batteries are expensive, so it is costly in the long term to have a cheap charger.

The new charger is much better. It charges three banks like the old one, but has a temperature sensor and a customizable charging profile to exactly match the manufacturer’s recommendations. All of the batteries on board are made by LifeLine and have the same charging profile, so customizing it was easy. But first I needed to remove the old charger and install the new one. 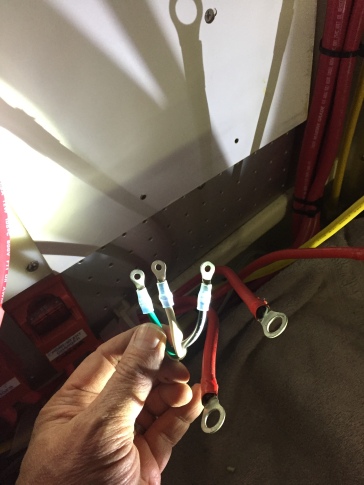 The temperature sensor simply adheres to the side of one of the batteries, then is plugged into the charger. The case is grounded to the boat’s bonding system with the larger green wire. 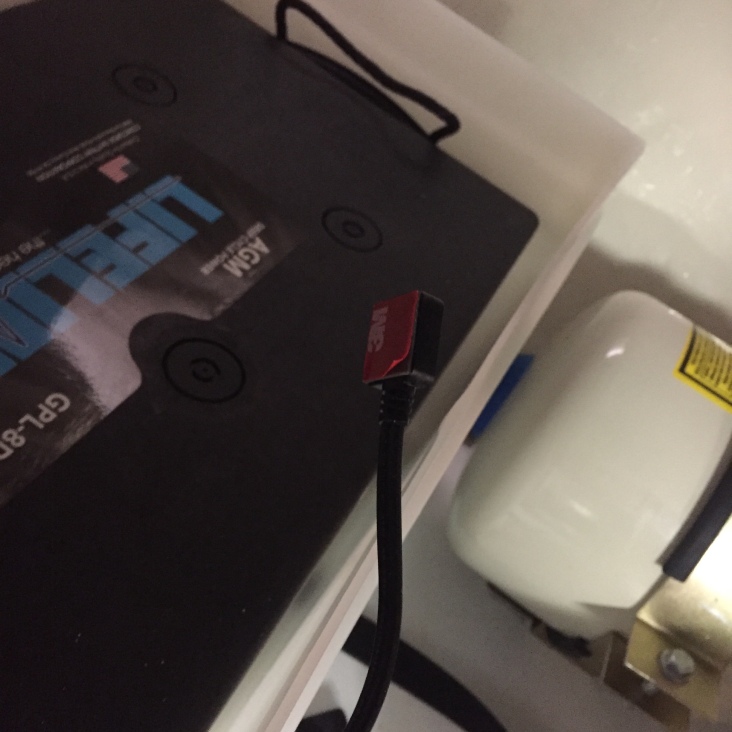 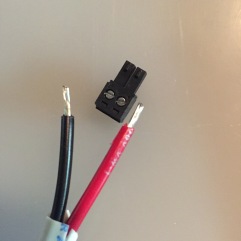 After reattaching the battery cables and turning on the AC breaker, I programmed the charger for the LifeLine charging profile and the job was complete! I will use the charger whenever Fiddler is plugged into shore power or when I run the generator away from the dock. I expect these batteries to last a very long time. 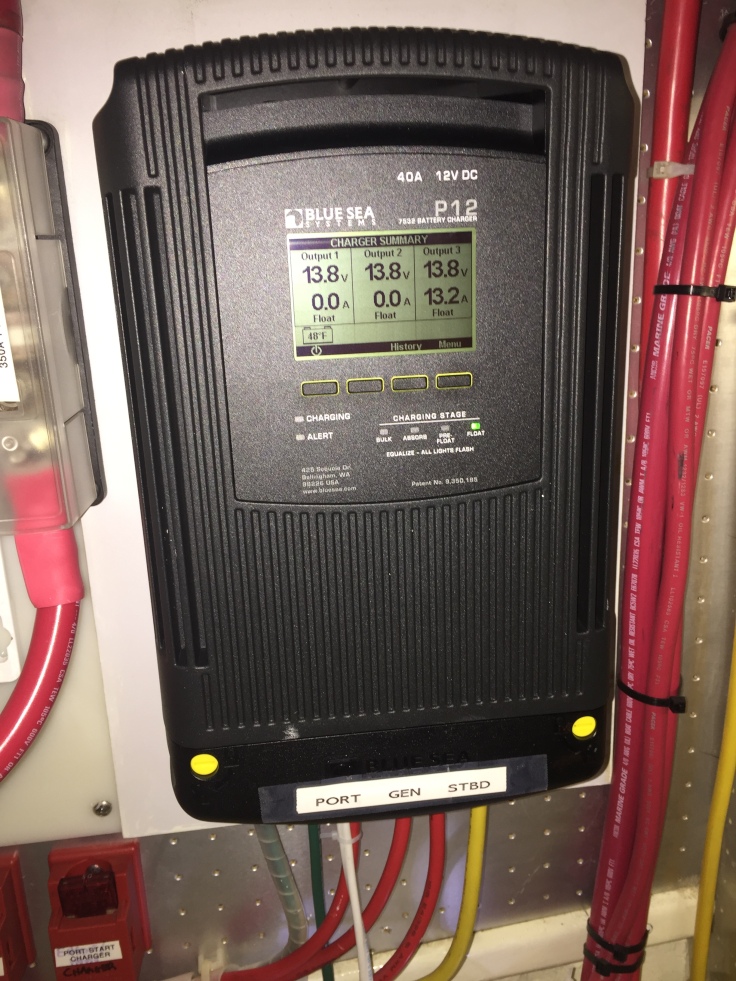 2 thoughts on “Replacing the Battery Charger”