Cathleen and her best friend Jenn decided to participate in the 60 mile Susan Komen walk for breast cancer this summer.  So one of our goals for this trip was to hike as much as possible.  That turned out not to be a problem.  We also visited two new places-Jones Island Marine Park and Prevost Harbor at Stuart Island Marine Park.  But first we have to get there…

We motored four hours from Seattle to Langley Marina on Whidbey Island.  This is a common stop for us.  In the spring we come here to see gray whales.  It’s an easy trip for an overnight getaway; 4 hours is not too short and not too long for being under way.  However, we don’t often stop here on the way to the islands, preferring to get further along.  But this time we were being leisurely and taking three days to get there.  It’s a nice little marina and the town of Langley has many nice shoreside restaurants and shops.  And there is walking.  The marina recently added new dock space in the form of a breakwater around the outside of the existing marina.  The walkway is wide enough to accommodate picnic tables too. 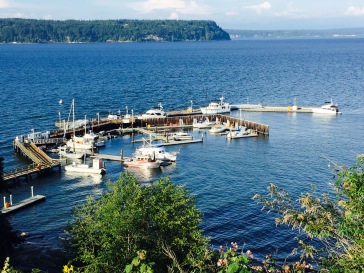 The picture of the marina above is taken from shore and requires a hike up a pretty steep hill/road to get there.  Good for training!  Once up the hill, the town is fairly flat.  We walked all around the town, visiting the Whale Museum, shops, and also stopped for dinner before returning to the boat.

Our next stop was Cornet Bay at Deception Pass State Park.  This is a very big state park and Cornet Bay is a small part of it.  It is the busiest state park in Washington.  It includes the bridge we will go under tomorrow and the shores on both sides, plenty of trails, campsites for tents and RVs, and even a freshwater lake for trout fishing.  We docked at a free standing float (not attached to shore, but firmly anchored) and took the dinghy to shore where we could hike some of the many trails. 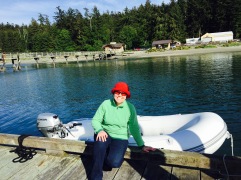 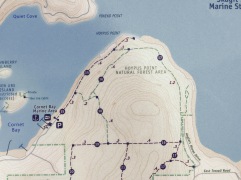 We left Cornet Bay at slack, the time the current slows down and changes direction before speeding up again.  We were surprised by the fog on the other side in Rosario Strait.  It was very thick and visibility was maybe a quarter mile, hard to judge.  We are always prepared for fog, however.  Our boat is equipped with radar, GPS, and AIS.  The radar obviously allows us to “see” other objects, such as boats, rocks, shore, etc.  They show up as red blobs.  I typically overlay the radar on to the chart which has our GPS position identified by a boat icon.  The chart is nothing more than a map for the water.  It shows the land and water areas, but when overlaid with radar, it is easy to determine if the radar image/red blob is a rock, bouy, or a boat.  AIS is somewhat newer technology for recreational boaters.  It stands for Automatic Identification System.  It is a black box that connects to my VHF radio antenna and broadcasts my position, boat name, direction of travel, and speed to other boats in range.  It’s range is line-of-sight.  Well, not in fog, but I can “see” them and they can “see” me on their screens, if they also have AIS.  It is optional for recreational boaters, but a lot of us have it.  It is mandatory for commercial vessels.  So we are in heavy fog in Rosario Strait, an area with heavy commercial vessel traffic.  I can see all vessels in the area on my radar and all commercial vessels and some recreational vessels on AIS.  And hopefully they can all see me.  We are all flying by instruments so to speak.  But very slowly.  The final safety factor that helps in unexpected fog is that I always have my course plotted on the chart.  All I have to do is follow it.  Without a course line I could easily get disoriented and go in the wrong direction and veer off course.  So that is the very long way of saying we had no problem in the fog.

Our destination for the night was, ironically, Blind Bay.  This is a bay on the north side of Shaw Island in the San Juans.  It is protected in all weather.  The only disadvantage is that the ferry stops on Shaw Island and the ferry wake will occasionally make its way into the bay and roll us a little.  We anchored and took the dinghy to the ferry dock where there is also a general store.  The store clerk recommended a walk across the island to Indian Cove.  It was a very pleasant walk on a paved road, but with no traffic.  There is usually only traffic when the ferry drops off.  On the way to Indian Cove we saw a newly born fawn in the woods along the road.  It was so small.  There is a campground on Indian Cove and we noticed all of the sites were reserved for the upcoming Memorial Day holiday.  The walk was very good training for Cathleen’s Walk for the Cure. 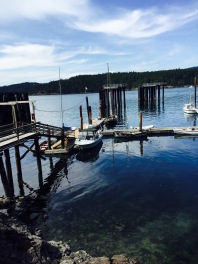 Next we cruise northwest to Prevost Harbor on Stuart Island and anchor in the bay.  They also have mooring bouys and a dock, but we prefer to anchor.  I trust the anchor and chain more than I trust the bouy, especially since the buoys are only rated for boats 45′ max.  Fiddler is 46′ and in calm weather it wouldn’t be an issue, but in windy weather we might drag the bouy, not good.  We dinghied to the dock and hiked on a short loop trail around this state marine park.  We stayed two nights here and the second day we hiked to the old school house and to Turn Point Lighthouse, all on gravel roads.  Turn Point Lighthouse sits on the point of the island where two major waterways intersect and where commercial traffic makes a major turn, thus the name.  This island is inhabited by off-the-grid folks that provide their own electricity (solar, generator) and water (wells).  They also have a new school house, but there are not enough students living on the island at the present time to support hiring a teacher.  So it sits vacant for the time being and the few students boat to the nearest island to go to school.  An enterprising couple set up a t-shirt stand at the old school house for people like us hiking by to buy t-shirts.  It is on the honor system.  You pick out what you want and take it with you.  Then when you are back home, you can log onto their website and send them the payment.  I bought a t-shirt.  Both nights at anchor were very pleasant. 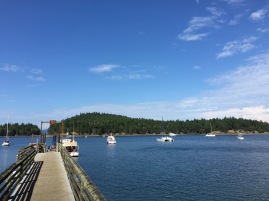 Next we head to Sucia Island, another state marine park.  This island is not inhabited and is 100% marine park.  We anchored in Echo Bay, the largest of several anchorages.  There was a guy motoring around in his dinghy that came up to say hi.  Boaters are very friendly. We took our dinghy around to Fossil Bay since they had a dock and we wanted to explore the island.  From there we hiked to the other end of the island, a total of 10 miles.  We were very tired after that.  But it was good training for Cathleen. The geography of this island is so different from the rest of the San Juan Islands.  It is eroded sandstone and the patterns in the shorelines are very cool and not like anything I have seen before. 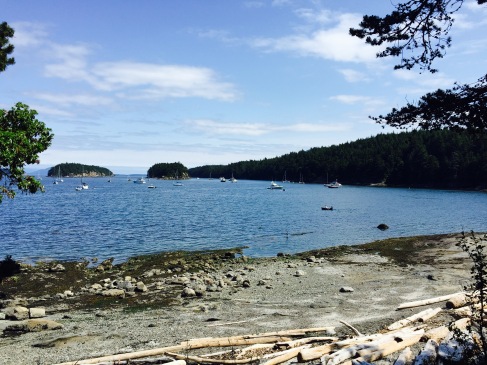 We pulled our anchor on this Memorial Day and headed to Roche Harbor Marina.  The holiday crowds packed the marina over the weekend, but they all cleared out today and when we arrived we practically had the place to ourselves.  We filled our water tank, pumped the holding tank, and walked to shore for ice cream and groceries.  When we stop at a marina in the islands, it will usually be here.  It has a special feeling to it that is hard to explain.  Sort of like what some people experience in Colorado with the “Rocky Mountain high”.  I felt that high when I lived in Colorado.  Roche Harbor has a similar feeling to it for me.

Next we stopped at Jones Island Marine Park.  We had previously never stopped here.  We have been by it many times and it was always too crowded to stop.  This park has a small dock and only 5 buoys.  There is room in the bay for only a couple of boats to anchor.  Completely full, the park only handles a small number of visitors.  We got lucky when we arrived and tied to an empty bouy.  Even though Fiddler is a foot too long to legally tie to a bouy, the weather was forecast to be totally calm overnight so the bouy would hold us just fine.  In fact, in calm conditions the bouy would hold much larger boats than us.  So we tied up for the night.  We dinghied to the park dock and hiked around the small island.  It seemed like we had it to ourselves.  Back on the boat we watched a magnificent sunset. 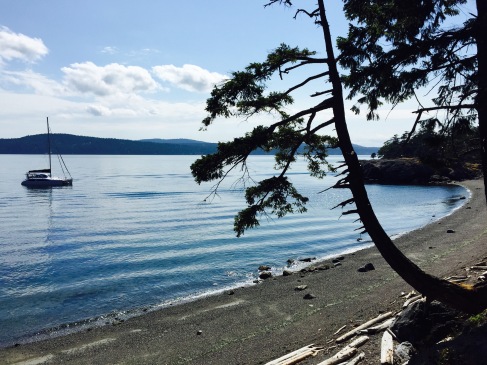 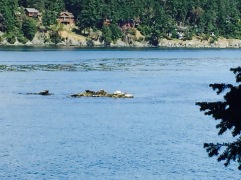 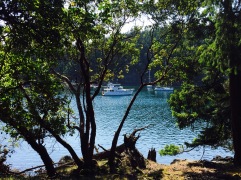 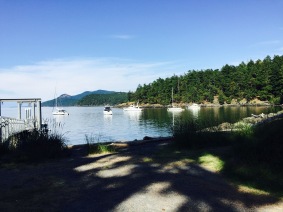 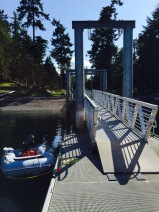 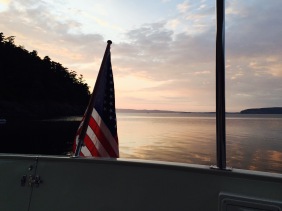 That was our last night in the San Juans.  In the morning we left in time to get through Deception Pass at slack and continued on to Langley Marina.  We had a nice dinner at the bistro and the next day cruised the final four hours home to Seattle.  As we turned the corner towards the marina, we were welcomed home by a sea lion on the bouy. 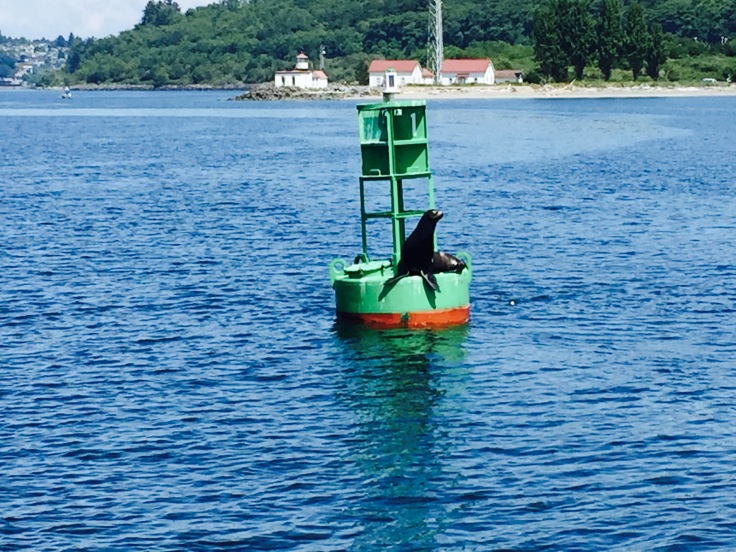