On this 3 week adventure we passed through the San Juan Islands, cleared into Canada and through the Gulf Islands, crossed Georgia Strait, and up to Desolation Sound. We also took a side trip to Princess Louisa Inlet. We put a total of 630 miles and 91 engine hours on the boat, for an average speed of just under 7 knots. And we only had to call the Coast Guard once!

Our first stop after leaving Seattle was to our regular standby, Point Hudson Marina in Port Townsend.  We stop here in order to have an early crossing of the Strait of Juan de Fuca the following morning when it is usually calm.  Our original plan was to go to Victoria from here, but the weather wasn’t cooperative.  Changing our plans on the fly, we beat our way across the Strait the next morning and stopped at Friday Harbor Marina for the night.  It’s an easy walk to town for ice cream and a few groceries.  We were docked near the ferry terminal and the sea plane dock.  We are ahead of the summer crowds. 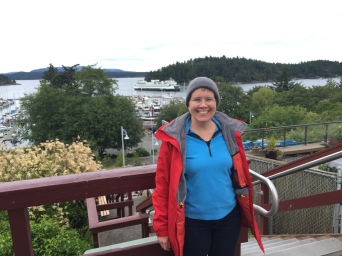 After dropping off the trash and filling the water tank in the morning, we left for Canada.  Since both of us have Nexus trusted traveler cards we were able to clear Canadian customs over the phone.  They asked us the usual questions about food, tobacco, firearms, and liquor, and our destination for the night (which had to be an approved location for border patrol).  We chose to anchor in Montague Harbor, a provincial marine park.  The customs agent advised that if nobody showed up within 30 minutes of anchoring, then we were good to go.  Nobody showed up.  We dinghied around the bay, stopped at the store, and had a margarita special at the restaurant before returning to home base for the night.  This is a beautiful and well-protected anchorage. 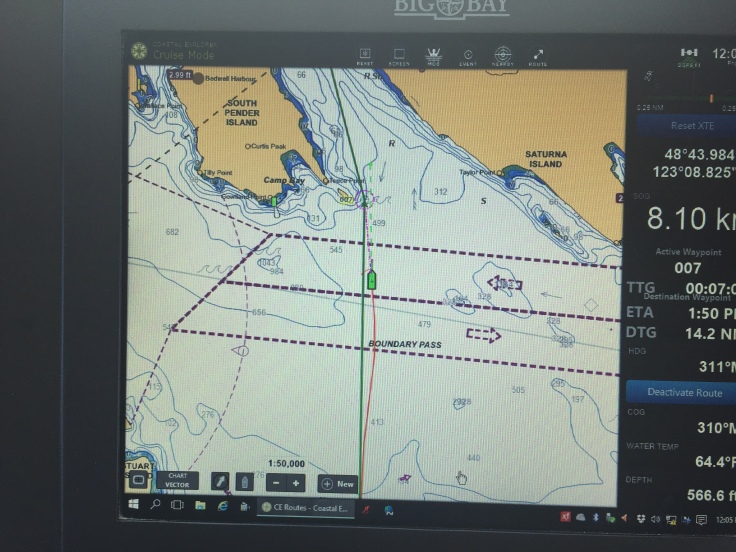 Here we are crossing the border into Canada.  I veered a little from the course line, but with the water 567 feet deep, I have some room for error!

We are crossing Dodd Narrows today, but slack isn’t until later in the day, so we had plenty of time to further explore Montague Harbor.  We dinghied to the park dock and went for a hike around the peninsula.  The tide was really low, making for a steep walkway from the dock.  The only animal we saw was made of driftwood. 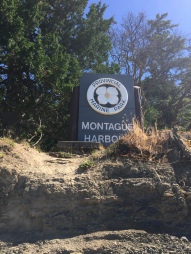 Next up was Dodd Narrows, a narrow passage where the current can be strong.  Generally boats go through single file at slack, one direction at a time. The current was still flowing north with us at 2.5 knots, totally safe.  Once through, the wind was really howling and the water was rough.  We had about an hour to go to our destination in Nanaimo.  We anchored in the bay across from town, where everyone else seemed to be, and luckily we found some space.  It took Dale three times to get the anchor to set.  We were ready to relax, finally.

Crossing the Strait of Georgia was a little uncomfortable, but apparently not so much for Cathleen as she slept all the way.  We anchored in Garden Bay in Pender Harbour by 11:30am and dinghied to the pub for a beer and lunch on the deck.  Later we dinghied to the Madiera Park government dock and walked two blocks to IGA for some groceries.  We then kayaked around the area and up Gunboat Channel before turning in for the night.  We dinghied all around the area the next morning before heading out for Desolation Sound.

The scenery continually improves as we venture north.  We arrived at the Prideaux Haven anchorage in Desolation Sound Marine Provincial Park at 7pm.  This protected anchorage has outstanding mountain views and room for many boats.  We explored the area in the dinghy after dinner.  We had an “it’s a small world” experience when we saw a boat owned by a fellow member of Trawler Forum.  He and his wife were on their way to Alaska.  We got their attention from the water and they invited us aboard for drinks and a boat tour.  It was past dark when we slowly motored our way back to our boat for the night. 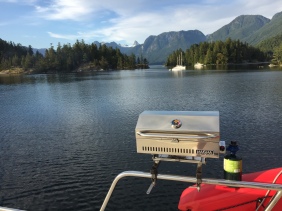 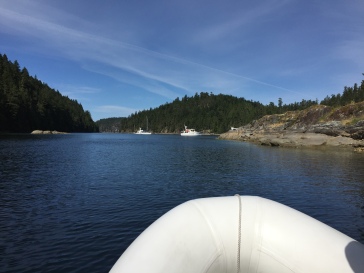 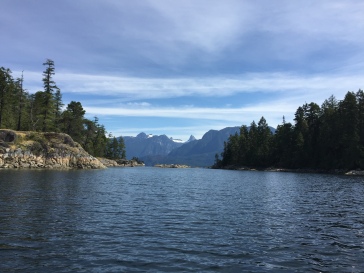 The sea bed was rocky where we were anchored and as we drifted with the wind and current overnight, we could hear the chain dragging across the rock.  At first I though we were dragging the anchor, but thankfully not.  At 2am, we both got up to look outside at the spectacularly starry sky.

We originally planned to go to Toba Wilderness Lodge and spend two nights on their dock, but they were not yet open for the season.  Instead we went to Refuge Cove and filled the water tank and bought some wine and ice cream while we pondered our alternatives.  We decided to head across the way to Squirrel Cove for the night.  It is a very well protected anchorage, but it also had a lot of mosquitoes.  We now call it Mosquito Cove.  They had infiltrated the cabin before we realized how thick they were and we battled them for two days.  We dinghied to the Squirrel Cove dock, walked up to the store, checked out the restaurant (closed), then headed back for the night.  Here is our Mosquito Cove anchorage.

We left in the morning in search of waterfalls in Toba Inlet.  On the way, Dale spotted a wolf on the shore.  It’s getting to be pretty remote.  Heading into the inlet, we spotted a few waterfalls.  The wind was blowing and the waves were picking up when we decided to head out of the inlet.

The further in we went, the water color turned greenish, I guess from glacial melt at the head of the inlet. 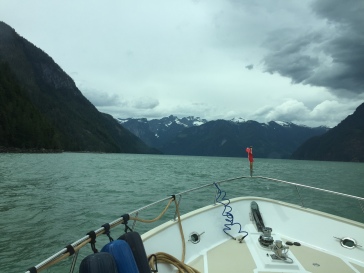 We left Toba Inlet and eventually made a big loop around an island and back to Prideaux Haven for the night.  Toba Inlet was as far north as we would get on this trip.  Tomorrow we head back to Garden Bay in Pender Harbour before cruising up to Princess Louisa Inlet the next day.

It is a 40 mile trip up Jervis Inlet, a glacial fjord, to Princess Louisa Inlet and Chatterbox Falls.  For many boaters, this is a bucket list destination.  We left Pender Harbour very excited for the day.  Even though it was cloudy and dreary weather, it was fun and beautiful.

Then about half way up Jervis Inlet, we hit something in the water that brought us to a dead stop.  I put the engines in neutral, swore some, then tried to determine what we hit. I thought it was a submerged log as the propellers were grinding. Unable to move on our own, we drifted a bit, then saw a couple of other boats coming our way. I hailed them on the radio and they stopped to see if they could help, or at least to keep us from drifting into the wall of the fjord, as it was way too deep to anchor. I contacted Victoria Coast Guard on the radio and after they determined we were not in immediate danger, they contacted Vessel Assist, a sort of AAA for boaters, for a diver or a tow. While drifting along I tried a couple of times putting it in gear, then the props started sounding normal. We motored around to see if there was any vibration or damage to the rudders. Perhaps the log worked its way loose and dropped away I thought. I contacted the Coast Guard, who was standing by on the radio, and let them know we were mobile again and to cancel the assistance. The other boats went on their way. We decided to head back to Pender Harbour and have a diver check things out. I called a diver that was recommended by a local marina manager and he came out about an hour later. We had become entangled in some abandoned commercial fishing gear and it was wrapped around the shafts. Apparently when I tried the engines while adrift, the props cut or ripped the line enough to allow them to move freely and get us back. He cut away the tangled mess and said there was no damage. Whew! We had a couple of beers at the pub then went to dinner. We began talking to a group at the table next to us, who were there on boats as well. We started telling them of our adventure, and they interrupted us saying “that was you!?”. They had heard our radio call to the Coast Guard and monitored our communication, as it is openly broadcast. They wondered what happened to us, expecting to pass us as they traveled back down the fiord. There is security in knowing fellow boaters are always willing to help out and the Coast Guard is just a radio call away. We plan to make it up to Princess Louisa Inlet tomorrow.

Starting over the next day, we had an uneventful trip up the fjord.  At the entrance of Princess Louisa Inlet is Malibu Rapids, a narrow dogleg that should be transited at or near slack.  We were about an hour early and it was too fast for our slow boat to go through, so we motored around a bit, keeping an eye on the conditions. Once through, it was five miles to the head to Chatterbox Falls.

At the head of Princess Louisa Inlet is a marine park dock.  Getting off the boat, there are a few trails, but not many as the geography is mostly vertical.  The scenery is stunning. 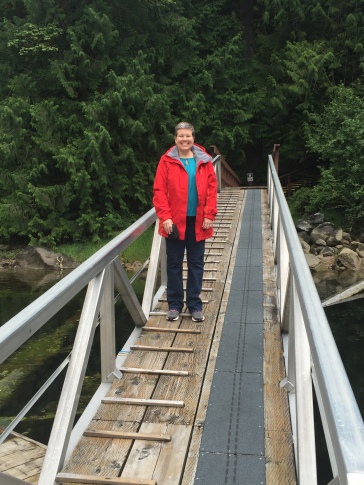 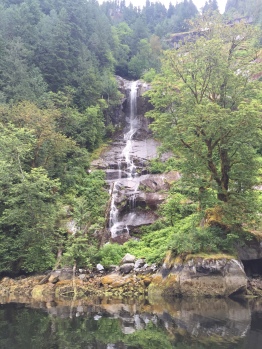 There were beautiful waterfalls all around, streaming from the sheer mountain sides.  We stayed for two nights and it was so peaceful.  Some people say it’s a religious experience visiting here.  I can see that.  I am sure we will be back again.

We basically backtracked to Pender Harbour, across Georgia Strait to Nanaimo, through the Gulf and San Juan Islands, to home.  What a wonderful trip!