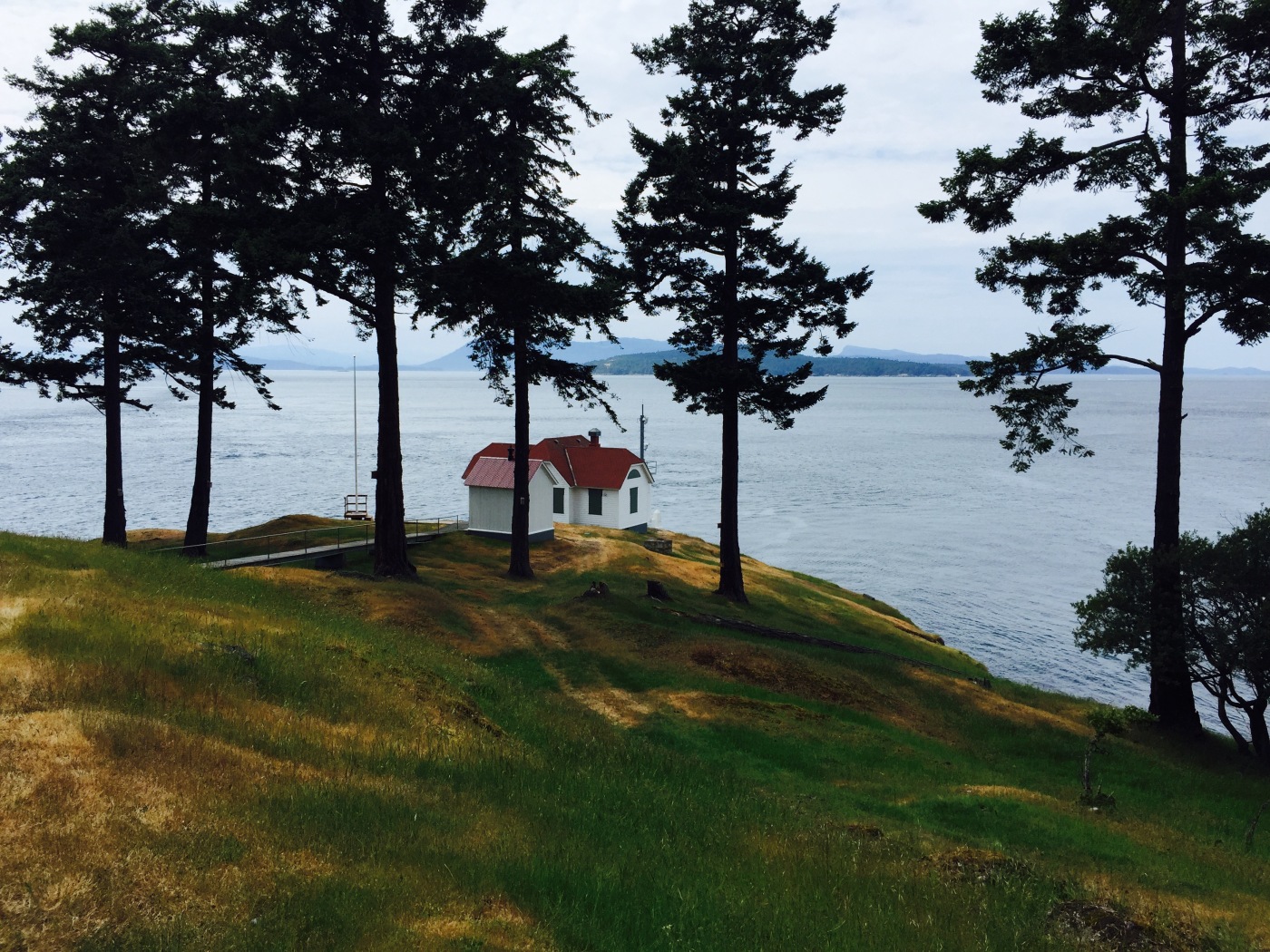 Fall cruising after Labor Day can include spectacular weather and small crowds.  Summer is over and kids are back in school.  Getting a slip in your favorite marina or finding room in a popular anchorage is practically guaranteed.  We like boating this time of year.  Joining us for a week on the water were Mark and Linda, friends from Dale’s hometown.

Not wasting any time, we picked Mark and Linda up at the airport and went straight to the boat so we could get away at a decent time the next day.  The weather was awesome for the start of the trip. 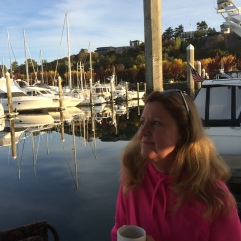 Our first stop was Deception Pass State Park.  This park has three floats offshore so if you dock there it is more private.  Usually there are a lot of people fishing from the shoreside dock, so docking a 46′ boat there would take away a lot of their fishing area.  Luckily, a float was available.  We dinghied to shore and hiked on a trail that followed the shoreline, eventually coming to a dead end.  We had nice views of the setting sun.  Back on the boat we had dinner and drinks and planned for our next day through Deception Pass and on to the San Juan Islands.

We timed our departure to coincide with slack current, the time when the current momentarily slows and changes directions before picking up speed again.  It’s easy to do from this park because we are only 5 minutes away from the pass.  No problem getting through and we were on our way to Stuart Island, our destination for the night.  We entered the islands through Lopez Pass across Rosario Strait, then proceeded through the archipelago to Reid Harbor on the south side of Stuart Island.  On our way we spotted a lot of splashing and motored over to check it out.  It was a stellar sea lion flinging a salmon around before eating it.  The stellar sea lion is a rare sight here.  As we moved on toward our destination, we saw a whale blowing in the distance.  Very exciting!  We motored toward it and saw it was a humpback whale!  We watched, photographed, and videoed the whale blowing and diving.  When it dove, its tail would be clearly visible and we knew it would be down at least 10 minutes.  We never knew where it would resurface, but we had fun trying to figure it out.  The water was calm and the weather sunny and warm.  And no crowds. 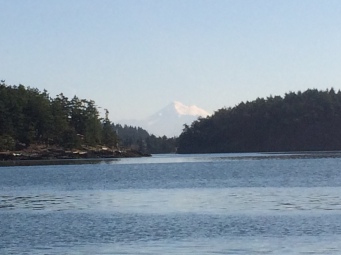 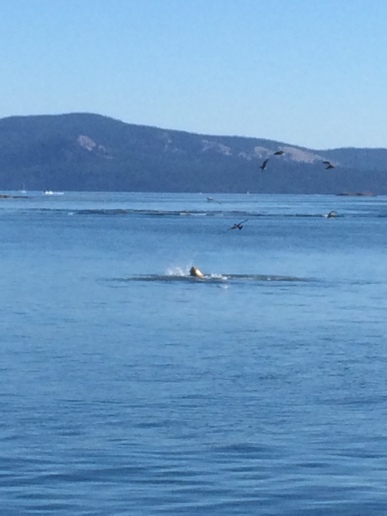 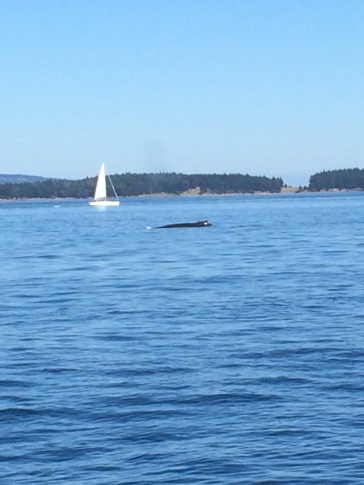 We anchored in Reid Harbor, a big protected bay on Stuart Island.  This island is sparsely inhabited by off-the-grid folks that provide their own electricity and water.  All of the roads are dirt and gravel.  Prevost Harbor is another protected bay on the north side of the island.  The small land mass joining the two harbors is Stuart Island Marine Park.  Both harbors have docks and there are picnic tables, campsites, and toilets onshore. 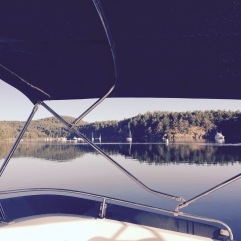 Before we dinghied to shore for a hike to the Turn Point Lighthouse, we dropped two crab traps to soak.  Off we went on the fairly long hike to the lighthouse, passing the old school house along the way. 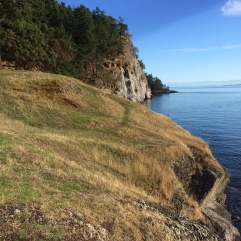 Returning from the hike, we were anxious to check the crab traps.  Mark and Dale dinghied to the traps and pulled them up.  It’s always exciting to pull up the traps, especially when they were as heavy as these.  We both caught the limit of 5 each among the 22 crabs!  Reid Harbor is very good crabbing!  Since it was getting dark, we decided to leave the crabs in the water overnight and cook and clean them the next day. 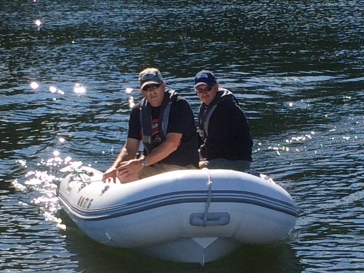 The next day we pulled anchor and not long after leaving the harbor we saw more humpback whales.  We watched them again for awhile, then circled Henry Island looking for orcas.  We did not see any.  Our destination for the night was Roche Harbor Marina, a favorite.  It is a full service marina with restaurants, fuel, water, slip-side pump out, nearby trails, stores, whatever you need.  They also hire a lot of college kids to help with the docking.  I should have known to exaggerate the boat’s beam because they shoe-horned us into a narrow slip.  Luckily we didn’t damage our boat or the one next to us.  But it was tight.

We walked to the stores and got a few supplies and souvenirs.  Later we had drinks and dinner on the deck of the Madrona Bar and Grill.  Once again, the weather was perfect.

We left Roche Harbor the next day and anchored in Blind Bay on Shaw Island.  This is a protected bay adjacent to Blind Island Marine Park.  Except for the occasional ferry wake, it is a calm anchorage in almost any weather.  Mark and Dale kayaked to Blind Island to check it out.  It has a little beach to land the kayaks, a few campsites, and picnic tables.  Dale and Cathleen then kayaked around Blind Bay.  It was a very relaxing vacation kind of a day.  This was our last night actually in the San Juans.  Tomorrow we head back south.

We timed our departure from Blind Bay in order to get to Deception Pass a little before slack.  We got to the pass about 20 minutes before slack, which was fine, so we proceeded through without any problems.  Once through, Mark and Dale tried their luck fishing but it was only bad luck.  No fish.  Our destination for the night was Langley Marina on Whidbey Island.  Dale and Cathleen sometimes stop here when they are Gray whale watching.  The marina was unusually full and they did not have room on the new breakwater dock, where we usually tie.  Instead, we were on the end of a pier inside the older part of the marina, which was perfectly fine for the one night we were staying.  The four of us hiked up the hill, around the town of Langley, and had dinner at the Prima Bistro before returning to the boat for our last night aboard.

From Langley, the trip to Seattle is about 4 hours.  Mark was at the helm when he shouted there was something in the water.  It looked like a log, but as we got closer we saw that it was an elephant seal, another rare sighting here!  We slowed and watched it before it dove and disappeared.  We proceeded to Elliott Bay Marina, docked, packed up our stuff, and dropped Mark and Linda off at their downtown hotel.  They stayed in Seattle another couple days to enjoy the sites. 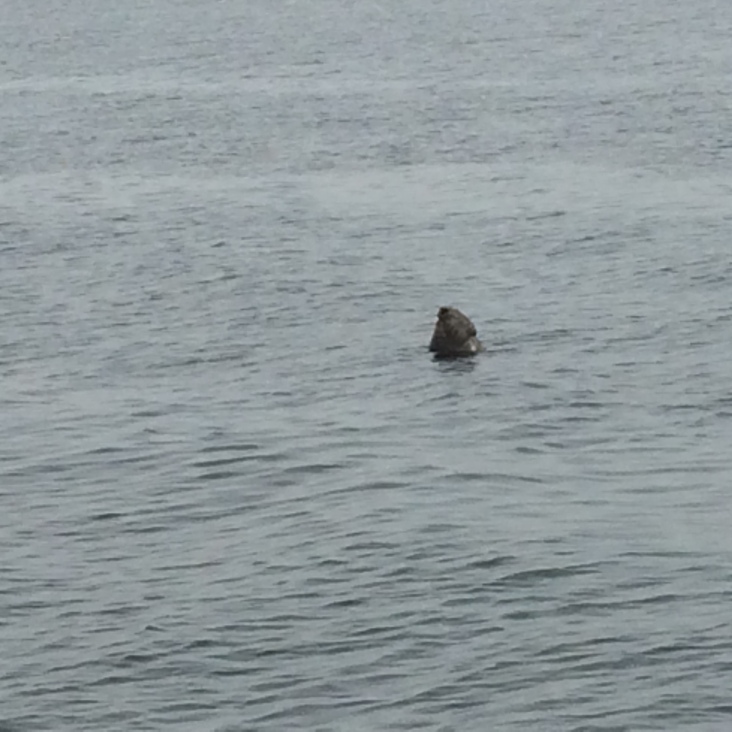 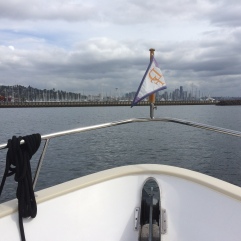 What a fantastic trip!