Before leaving Juneau, we had lunch outside at The Twisted Fish on a rare sunny afternoon.  The place was teeming with cruise ship tourists.

Scott and I left Juneau for a short 20 mile cruise to Taku Harbor.  We anchored and grilled steaks for dinner.  I don’t usually take pictures of food, but this turned out so well that I couldn’t resist.

The next day was a long one, heading 60 miles to Pybus Bay, but we saw several icebergs that broke away from Sawyer Glacier in Tracy Arm.

Pybus Bay was a very scenic anchorage.  We dinghied and kayaked.  In the morning we saw a grizzly on shore. Also saw a whale briefly. There were four other boats anchored at Pybus Bay but we were able to find a spot at the head of the bay. We set out a crab trap and dinghied around the area and over to the fishing lodge. The owner met us on the dock and wouldn’t let us walk the area because the guests had all just returned from fishing. The owner is from Utah and she and Scott know some of the same people. We had pasta for dinner then kayaked to shore and checked out the depths around the boat. There is a minus 4.5 tide in the morning. Caught five crabs, cleaned and cooked them, and put them in the cooler.

From Pybus Bay we decided to avoid the towns of Petersburg and Wrangell.  Cathleen and I saw them on the way north.  Anchoring is a lot more enjoyable so that is what we did.  Outside of Petersburg is LeConte Glacier and there were many icebergs that had broken away and floated into the channel.

Our cooler was getting low on ice.  We maneuvered toward some smaller ice and Scott scooped up enough to fill the cooler.  That evening we had some of the ice in our drinks.

Since we left Juneau a day earlier than planned, we had an extra day to spend before arriving into Ketchikan.  We liked the protection and crabbing at Exchange Cove and spent the extra day there.  Crabbing was very good, as was the kayaking.

After two days here, we headed to Meyers Chuck and then to Ketchikan.  We had not seen any Orca whales on this trip until today.  We have been hearing that the salmon don’t start returning until late June or early July.  The Orcas that feed on salmon have confirmed their return. 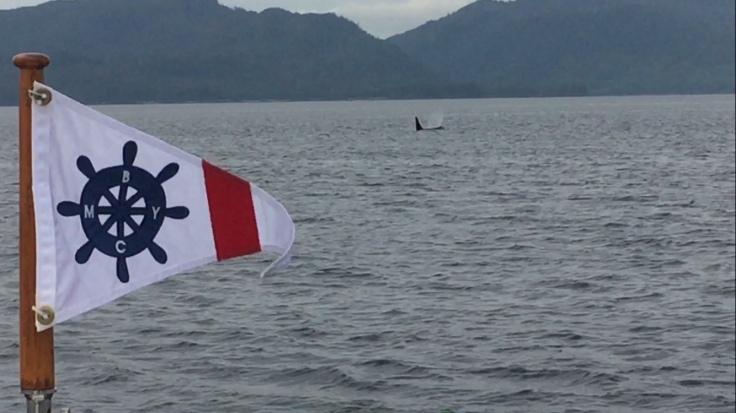 There is another crew change in Ketchikan.  Scott is going home.  Cathleen is flying in.  Our friends Mark and Linda are flying in from Illinois.  This is their second cruise with us and are great fun!  We plan to spend a couple of days in Ketchikan before circumnavigating Revillagigedo Island, the island that Ketchikan is on and where Misty Fjords National Monument is located.

After going around Revillagigedo Island, we start the journey back home, which I don’t want to think about now.