Sitka is a beautiful little town.  We were lucky to have some nice weather to walk around it and take it all in.  We took a taxi to the Fortress of the Bear, but they closed early for Fathers Day.  Instead, we stopped at the raptor rehab center to see the many eagles, falcons, hawks, and owls recovering from various injuries.  The most frequent injuries resulted from flying into power lines or being struck by a vehicle.  We walked back to town and visited some of the historic sites before enjoying an incredibly colorful sunset. 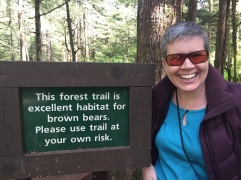 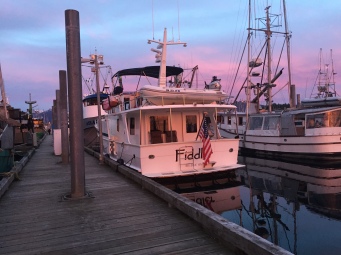 My niece Amy and her friend Kristin arrived Sunday evening to join us for the leg to Juneau.  They flew from San Diego through Seattle.  We left early Monday morning.  The wind was really blowing and getting out of the marina was a challenge.  It felt like we were in a sail boat.  The waters were also pretty rough and things didn’t clear up until we were anchored in Appleton Cove.

The next day we cruised to Pavlof Harbor, a small anchorage 40 miles away.  On the way we were treated to pod after pod of humpback whales.

Once we were anchored in Pavlof Harbor, we kayaked to the waterfall outlet from the lake to see if there were any bears.  Lots of eagles, but no bears.  On the way back to the boat, we visited with another boating couple and they came over for a glass of wine.  As we were talking, someone noticed a brown spot moving on shore.  It was a large brown grizzly!  Amy took the kayak to shore for a closer look, but not too close.  What a great anchorage!

The next anchorage in Coot Cove was calm and pretty, but it was not as exciting as Pavlof Harbor.  We were up early the next day to get to Juneau in hopes of a convenient slip near town.  As we approached Juneau, we encountered smaller sightseeing boats and sea planes serving the many cruise ship passengers.  We were obviously back to civilization.  We docked and decided to rent a “car” since Amy, Kristin, and Cathleen were flying home and Scott was flying in.  Scott and I would continue on the leg from Juneau back to Ketchikan.  One of the highlights for me was having halibut and chips at The Hangar.  One year while I was working, I sampled many restaurants’ halibut and chips and The Hangar was the winner with its light tempura coating and thick pieces of fish. 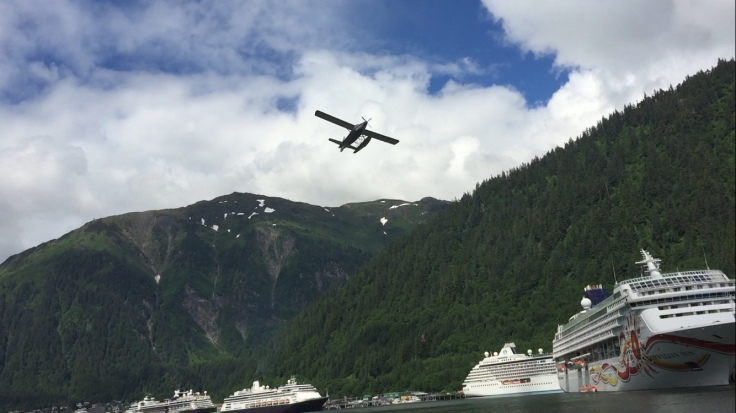 After getting everyone off to the airport, Scott and I decided to get out of town.  We left about 4pm, filled up at the fuel dock, and left Juneau bound for Ketchikan, taking the route near many glaciers.