Ketchikan has been a hub for crew changes. This is the third and last time to be docked here. Mark and Linda flew back home and Thomas arrived for the leg to Shearwater/Bella Bella. He and his lovely wife B-Dub are good friends of ours from Redmond. They have seven children so getting away for a week was challenging. Thanks to B-Dub for making it happen! Cathleen flew home today too, but before she went to the airport, the three of us walked to lunch. Thomas and I still had to re-provision at Safeway for the week. We got so many groceries that we had to take a cab back to the marina. But we wouldn’t go hungry or thirsty.

Before leaving Ketchikan, we refueled the boat. Then we headed for the anchorage at Foggy Bay. The conditions on the way were a little rough but once inside the protected anchorage, it was calm and serene.

Arriving later in the evening was the boat named Insidious. They were docked a couple of boats down from us in Ketchikan and I stopped and talked with them when they were out on the dock. They are relocating from Alaska to Washington and are moving their boat down. They asked where we were headed and I said Foggy Bay. They said they had no plans yet. So we were surprised to see them show up at Foggy Bay. Julie, from Insidious, kayaked over to say hi to us as we were sitting out in the cockpit. That was nice. She asked where we were headed and I said Prince Rupert, staying at Cow Bay Marina if they have room. She said she wasn’t sure where they would go.

The next morning Insidious was already gone. We departed and crossed the open ocean area of Dixon Entrance with no problem and proceeded on to Prince Rupert, the largest town in northern BC. It has a WalMart so that tells you something.

It also has a large shipping port.

As we approached Cow Bay Marina, there was Insidious tied to the breakwater, not a calm place to be. I had called the marina earlier in the day to reserve a slip and they said they only had one left, which we took. Had I not called, Insidious would have taken it. Sneaky of them to leave early, I thought, but that is probably just the bank examiner in me coming out. However, Thomas was convinced they were playing us.

Thomas and I had a fun evening in town, having dinner, playing darts, and pool. We visited several fine establishments including the Breakwater Pub, Moby Dicks, and Zorbas.

Continuing south the next morning through Grenville Channel we met the Disney Wonder cruise ship. There was a huge outdoor video screen playing on the top deck. I think it was too cold and wet to watch an outdoor movie.

Thomas was worn out from too much fun.

Halfway through the 45 mile channel we stopped for the night at Klewnuggit Inlet.

This is a protected and scenic anchorage, as are most that we have been to. Guess who was already there-Insidious. They were in the prime anchoring spot, but there were also other places for us to anchor. I called them on the radio to say hello. Once again they asked our plans for the next day. I said we are going to Khutze Inlet. They said they haven’t decided where to go, but said they would likely stop in Hartley Bay. They said we might want to leave later than our planned 8am departure due to the tidal currents in the channel. I had already researched it, but double-checked and stuck with my plan. I was surprised they were trying to get us to leave later. I tried to raise them on the radio to let them know about the right timing, but they didn’t answer.

Up early the next morning, preparing to depart at 8am, I notice Insidious weigh anchor and head out ten minutes ahead of us. We followed them all the way through the channel to Hartley Bay, but they continued on. The only anchorage they could be going to was Khutze Inlet, the place I told them we were going. That would be ok, but there are only a couple of good anchoring spots there. Thomas was right, we were being played. We couldn’t pass them in our slow boat, nor would I want to, so we decided to ditch them for good. That turned out to be an awesome choice.

Off in a bay sat the old abandoned, closed, and falling down cannery location at Butedale. We decided to turn in and see what they are all about.

As we were heading toward the bay, we were “attacked” by a group of Pacific white-sided dolphins coming to play in our wake. When they saw us, they quickly swam toward us, splashing and jumping. They played in the wake for 10 minutes then went on their way. 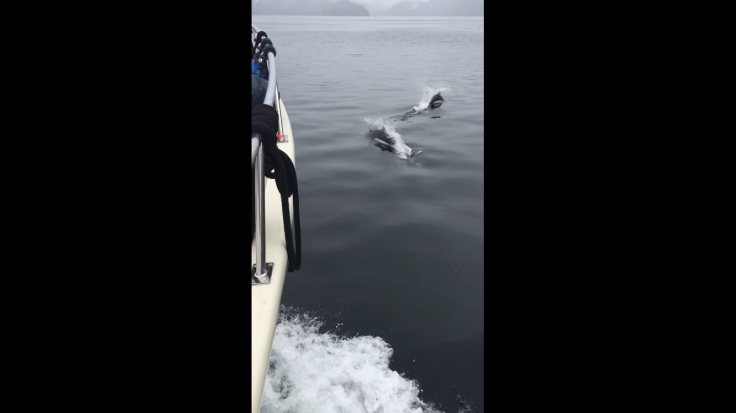 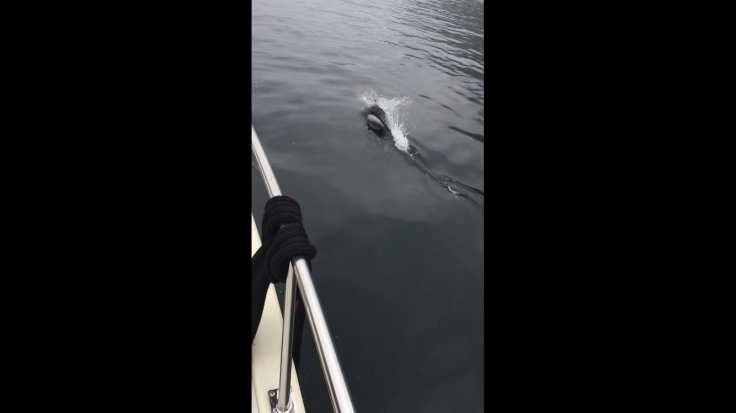 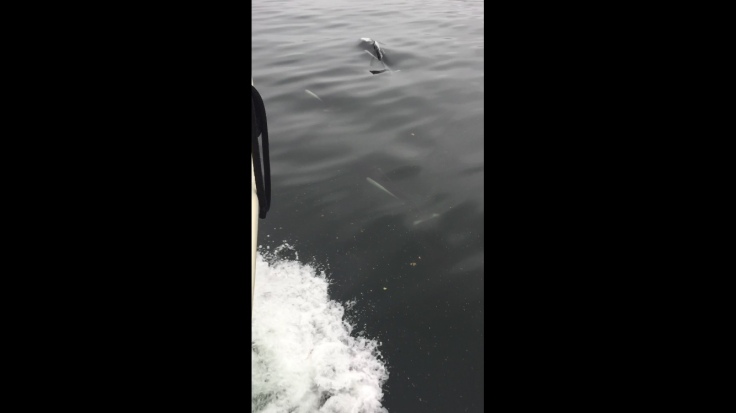 The cannery once employed 500 people but now is watched over by one caretaker named Cory and his dog, Buddy, and cat, Tiger. Although the cannery is closed, there is an old dock and passing boaters are allowed to tie up to walk the grounds or to stay for the night, at your own risk. The three of them met us at the dock and Buddy immediately jumped on the boat and ran around it, including inside, apparently looking for a sandwich. Herding Buddy off and closing the door behind him, Cory then took us on a guided tour of the dilapidated buildings and the power plant.

There were five buildings that housed the workers back in the day. They were segregated by Japanese, Chinese, First Nations, White, and another that I don’t recall. Cory told us of the plans the new owner has for the place, including a small marina, eco tourism, and bottling the pure water from the lake above the cannery. Selling the bottled water is expected to be the big money maker. He invited us to spend the night on the dock and offered us the use of his satellite internet. There was a sailboat that had been there two nights already. We decided to stay. Cory has left Butedale one time in the last 4 years, only then because he burned himself and needed medical attention. He says there are plenty of visitors in the summer with up to 500 boaters stopping by. That’s enough humanity for him apparently.

The next day we topped off the water tank with the pure Spirit Bear lake water and headed for Kynoch Inlet, reportedly one of the most scenic fjords on the planet. Except for the salmon farm on the way, the scenery was spectacular.

Kynoch Inlet is a 9 mile fjord lined with tall mountains and waterfalls. The anchorage is at the head of the inlet. Only one other boat was there. While I usually prefer to have an anchorage to myself, it was reassuring to have another boat nearby in this very remote wilderness of Fjordland Recreation Area.

We left in the morning with the ebb tide that gave us a nice push to Shearwater. The weather was clearing and warming up, a welcome change from the rainy, chilly days. As expected, the dock was full. We refueled and anchored in the bay outside the marina, a close dinghy ride in. We had accumulated a week worth of trash and recyclables and Shearwater is one of a few places that allows boaters to drop it off. After a short tour of the small fishing resort, we stopped at the pub/restaurant for dinner and played pool on the free tables. It has been a long time since I saw someone make the 8 ball on the break to win, but Thomas did it.

The next day we had a crew change as Thomas returned home and Cathleen joined. In order to get to the airport in nearby Bella Bella, we dinghied to the dock, took the SeaBus water taxi to the government dock in Bella Bella, and took one of the two town vans to the airport. All of that takes about the same time as driving from our house to the Seattle airport, but is much more interesting. The Bella Bella airport has a check in desk, waiting area, and a coffee shop. There is no security here. Most of the people are flying in and out for fishing charters. Thomas was on the turnaround flight that Cathleen arrived on so it was an easy exchange. It was great having Thomas on board to share the experience of SE Alaska and the north coast of BC!

3 thoughts on “Ketchikan to Shearwater/Bella Bella”