The Broughton Islands Marine Park is broadly defined to include an area between north Vancouver Island and the mainland encompassing some 300 islands and narrow waterways.  It would take years to see them all.

Its rich history begins with Native villages dating back thousands of years. Clamshell midden beaches are plentiful where the villages once dotted the shores.

Many boaters consider this a destination and go no further. Besides the beautiful scenery, there are a half dozen family owned marinas here. These marinas are different from marinas elsewhere. They are small and a little rough around the edges and the owners make do with whatever they have. The charm is that they appreciate each and every visitor during the short summer season whether they have a potluck on the dock, happy hour, or a Saturday night pig roast.

Cathleen and I spent time at three marinas here. The first was Sullivan Bay Marina. This is one of the largest marinas with float houses, ample dock space, grocery store, restaurant, and fuel dock. It’s like a small, busy village. In fact, the docks are named like streets. We were on Hoochie Lane. In this part of the world, a hoochie is a fishing lure. The entire village is floating. Only the fuel storage tanks are on the land. The restaurant is open three days per week and is very popular. We docked around noon and the dockhand suggested we immediately make a dinner reservation, but we were already too late. We didn’t know reservations were needed, or that you can call in days ahead of your arrival and get on the list. We had a nice meal on the boat instead.

The next stop was Kwatsi Bay Marina. Max and Anca have owned and operated this marina since 1998. They live in a nearby house on shore and raised two children here. This is a good example of a wilderness marina. There is no power and water is pumped from a creek. A small store offers local arts and crafts including pottery and woodwork. Every evening on the small dock only big enough for a dozen boats, Max and Anca either host a potluck dinner or happy hour.  It was potluck for us.

Our final marina stop in the Broughtons was Pierre’s Echo Bay Marina. This place is legendary. Echo Bay has been a gathering place for thousands of years for First Nations people. For more than 100 relatively recent years it was a center for logging and fishermen. Since 2008 it has been a marina for summertime boaters. It is owned and operated by Pierre and Tove who continually best the competition with pig roasts, prime rib dinners, fresh fish and chips, rubber duckie races, live musical entertainment, and more. The docks are sturdy and power is available, but no potable water. They have a grocery store and fuel dock. Pierre owns the surrounding land as well and has installed a playground, fire pit, and a hot tub overlooking the bay. The hot tub is filled with salt water and heated with wood.  Many visitors stay for days. Unfortunately, Cathleen had to get back home and flew out the next day. Of course they have float plane service here. 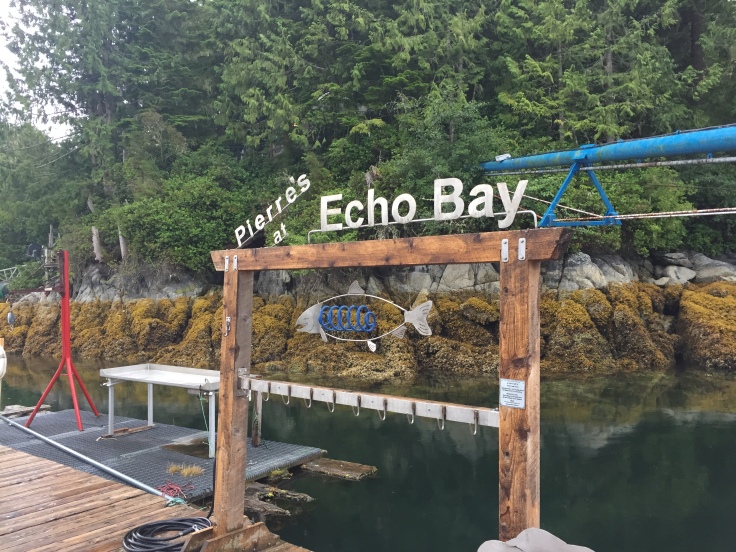 I’ll be single handing the rest of the way home.  It’s been so fun with all of the crews along the way!