Gig Harbor is both a bay on Puget Sound and a town on its shore.  It is located 21 miles south of Seattle and is a popular place for recreational boaters to visit. Not only is it a quick 3 hour boat trip, but there are several good marinas, restaurants, and parks within walking distance of the marinas.

We left Elliott Bay Marina at 2pm after the rainy morning gave way to sunshine. A pod of six or so Orca whales were swimming in the distance as we passed Blake Island. We motored toward them for a closer look but they were too fast. I was only able to get some distant photos.

As we came around the south end of Vashon Island, Mount Rainier came into view and it is always exciting to see this huge mountain/volcano. I hope it stays quiet a while longer. 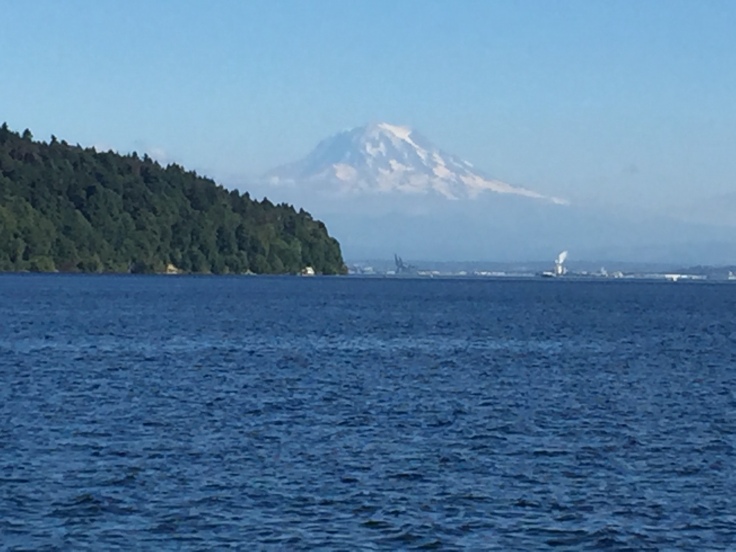 We arrived at Gig Harbor around 5pm and docked at Arabella’s Landing. Our yacht club has an outstation here and as a member of the group, there is no charge for a slip. One of the most enjoyable parts of boating for me is having a cocktail and relaxing after a day’s journey. Cathleen and I enjoyed a glass of wine and watched the activities in the harbor, including the gondola, just like being in Venice, sort of. Or Las Vegas, haha. It’s always fun boat watching.

Dale called his friend, Rob, that he used to work with and has recently retired, living in the Gig Harbor area. He and his wife, Terry, met us at Tides Tavern for dinner. This is a very popular restaurant and has a long history in the area. They have a dock for customers arriving by boat and plenty of seating indoor and out. We walked three blocks from the marina to get there. It was fun to catch up with Rob and Terry.

Check out time the next day was 1pm. We planned to go to Net Shed #9 for lunch and called the marina to extend our check out time. They said that they needed the slip for incoming guests for the Labor Day weekend, so we had to vacate. No problem, we motored out to the bay and dropped anchor, then dinghied in to the public dock. The public dock and park were recently renovated and are very nice with a viewing area, waterfront seating, and restrooms. 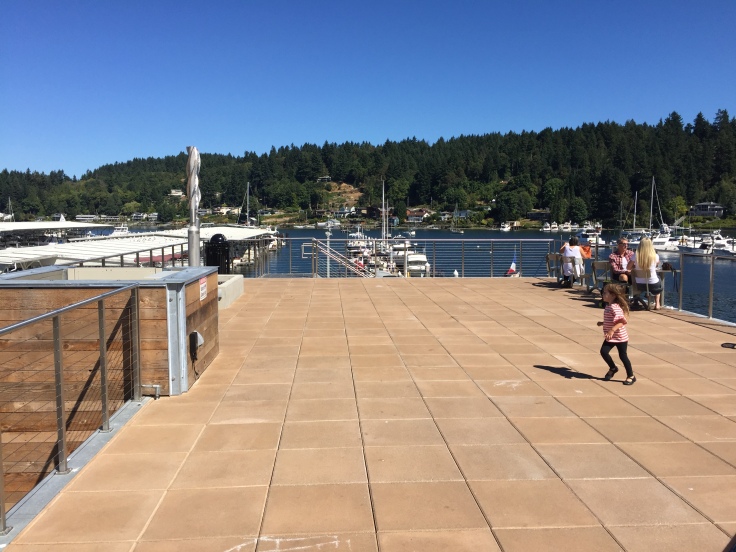 We waited a short time for a table outside at Net Shed #9, but it was definitely worth it!

After picking up a few provisions at the local chandlery, we dinghied back to Fiddler. There were already several additional boats anchored nearby for the holiday weekend. After we weighed anchor and left, I’m sure there was a rush to get our spot.

We left Gig Harbor about 5pm and got back to Elliott Bay Marina at sunset. As we were getting close to Seattle, a ferry, the moon, and Mount Rainier posed for great photo!

For a quick overnight getaway, Gig Harbor is a favorite.