Every couple of years Fiddler needs to come out of the water. Usually it gets hauled out for a visual inspection of the hull, to apply a coat or two of anti-fouling paint, and to clean up the propellers, drive shafts, thru-hulls, and struts. In addition, this time Fiddler’s seals on the shafts and rudder posts that keep water out needed to be replaced. One of the rudder post seals and both shaft seals were leaking a little. All could have likely gone longer, but probably not two more years until the next haul out. So it was time to replace them. Plus I would rather not defer maintenance on items that could sink the boat if they failed.

The bottom paint was getting thin in places and definitely needed refreshed. I use an ablative paint that washes away with use of the boat, similar to a bar of soap. New paint can be applied directly over the old paint and it never needs to be scraped off, unlike hard non-ablative paint. A good power washing cleans it up nicely for the new paint.

In the picture above, there is supposed to be a weed cutter in front of the stabilizer fin in order to keep weeds and kelp from getting caught in the fin. Finding things like this is another good reason for inspecting the hull out of the water. Coming home from Alaska last summer, I kept catching kelp on this fin. Now I can see why. The yard made another one for me and screwed it back in place.

It all cleaned up nicely. I usually have a diver check the condition of the hull and replace the zinc anodes every four months. The anodes (those round things attached to the shaft) were badly corroded, meaning they were doing their job so the shaft doesn’t corrode. We replaced them too.

With the work completed, time to put Fiddler back in the water, good for two more years! 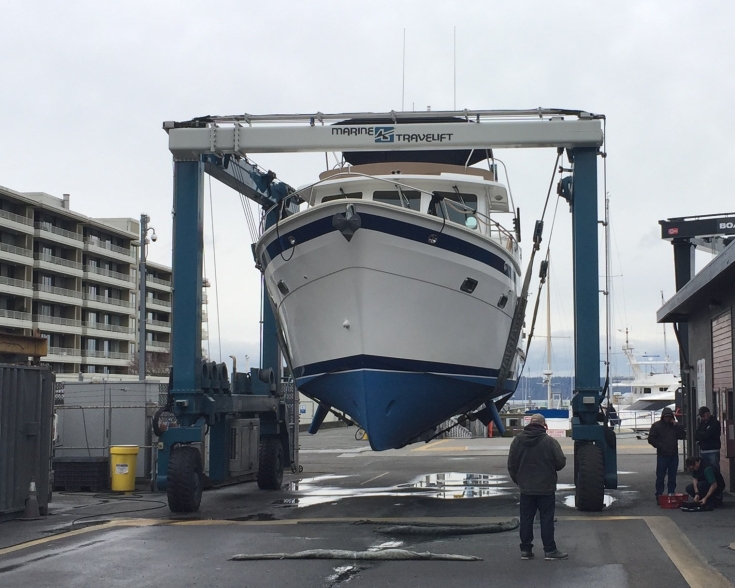 2 thoughts on “Haul Out”